The AKG K240 headphones have been around in one form or another since the mid-seventies and lives on to this day with a few changes from the originals along the way. At the time, it was known as the K240 Sextett due to its six passive radiators that helped supplement the bass. While the current K240s no longer contain this feature, they remain a staple of the studio headphone world due to their highly accurate sound representation, versatile use, and incredible value. Today, we're taking a closer look at two of the line's modern iterations -- the K240 Studio and K240 MKII.

The Studio and MKII versions of the K240 are very similar semi-open style headphones, with the main differences being design and a few extra connectivity features and accessories on the latter. While both contain a straight XLR mini to 3.5 mm cable and 3.5 mm to 1.4" adapter, the MKII also includes a coiled cable as well as an additional set of velour cushion pads (as featured on the AKG Q701s). That aside, both will give you the same experience sound-wise. Both feature a self-adjusting headband, a frequency bandwidth of 15 to 25,000 Hz, a max input power of 200 mW, a Rated Impedance of 55 ohms, 104 decibels of SPL and a removable cable. 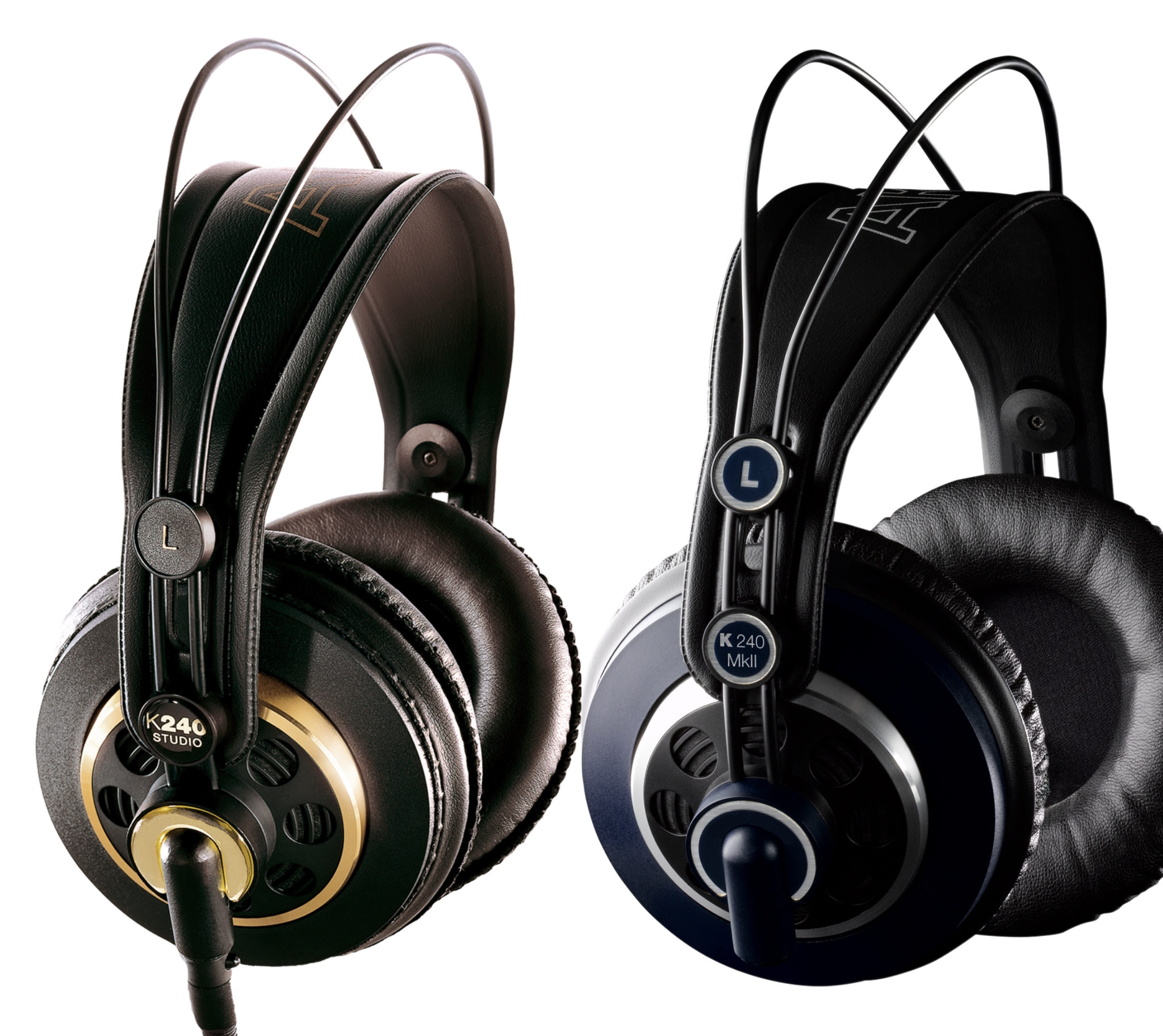 The K240 is well known and highly regarded many of its aspects, it does fall a bit short when it comes to build. Don't get me wrong, they are far from the cheap throw-away cans you might find at a big box store but they definitely feel a little weak due to their mostly plastic construction. Still, I know more than a few people who've had the same pair of K240s for years and they are still running strong. The cups themselves should fit comfortably on most ears. If faux leather cups tend to irritate your ears over time or get sweaty, the valours that come with the MKII are worth the upgrade. Overall, the build components make both the Studio and MKII very light. So while this might not make them feel rather strong, it does allow them to remain comfortable for extended periods of time versus heavier headphones -- a big plus for long studio sessions.

The main reason for the K240's incredible longevity as one of the most used studio headphones in the industry is easily its highly accurate and incredibly clear sound reproduction. If your main use for a pair of headphones is going to be mixing and accurate sound referencing, the AKG K240s are hands-down phenomenal. The highs are exceptionally crisp while the mids remain crystal clear and highly detailed. Better yet, they offer a very neutral sound representation, meaning the sound you hear is the natural sound without any added coloration (very important for a set of studio headphones). Furthermore, they shine in low volume settings, something that can't be said with several other higher priced studio headphones.

As far as the bass goes -- it's not bad, but it's not the K240's strong suit. They remain clear and detailed but roll off as they get into the lower frequencies. This means if you're looking for a pair of Beats-style headphones with an emphasized bass response, these aren't it. But for studio purposes, these are highly versatile, perfect for mixing a wide range of musical genres including rock, metal, pop, folk, piano, orchestral and more. Outside of the studio, they work exceptionally well for rock, acoustic, metal, classical music and more, but you might want to get an external headphone amp (such as the FiiO E11) as they don't get too loud when driven by a phone, mp3 player or laptop.

While EDM and hip-hop fans looking for a pair of headphones to crank out their favorite songs will want to look elsewhere, the K240s are the perfect choice for home studio musicians. Featuring magnificently detailed and highly accurate sound representation at price-point that really can't be beaten, it's no wonder why the AKG K240 has remained a staple of the studio headphone world. Whether you go with the K240 Studio or upgrade to the MKII, rest assured that every single penny is money well spent.