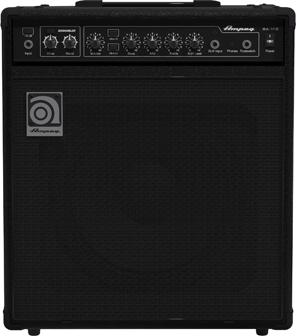 For many bass players, the Ampeg brand is synonymous with high-quality tube-driven bass amps. Between their SVT, Heritage and Portaflex lines, Ampeg has the premium bass amplification market covered. So when I had the chance to try one of their smaller, budget-friendly options, I wasn't sure what to expect. I am, of course, referring to the BA-112 (version 2, to be exact) -- a 75-watt solid state 1x12 combo bass amplifier that can be had for less than $300. While some out there might discount the BA-112 on price alone, I’ve tried enough guitar and bass amps in my life to know that you can’t discount what modern manufacturers are able to deliver nowadays at these kinds of prices. After putting the Ampeg BA-112 through its paces, I can say that this little combo certainly comes packing plenty of surprises.

The Features Of The Ampeg BA-112 Combo

Ampeg fans should find the layout of the BA-112’s front panel instantly recognizable. Referred to by the company as their “Legacy Preamp,” it consists of a Master Volume knob, Ultra-Hi / Ultra-Low buttons, and a 3-band EQ. To the right of the EQ section, you'll find a few modern extra’s in the form of both 1/4" and 1/8" auxiliary inputs, a headphone output, an AUX Level knob, and a footswitch input -- perfect features for those out there looking for a very capable practice amp. And last but definitely not least, we have the bells and whistles of the BA-112 -- the Scramble circuit, a two knob side-section designed to emulate the sound of an overdriven SVT amp.

As for the build, the BA-112 features an all-steel chassis, impact resistant metal corners and a solid-braced cabinet construction that should easily take the beating of being constantly lugged around or even life on the road. And speaking of the build, the BA-112 also features a slanted edge design, allowing it to be placed on its side at a 60-degree angle, much like a traditional on-stage reference monitor.  And at 40 lbs, it’s light enough that it can be carried around without much issue. 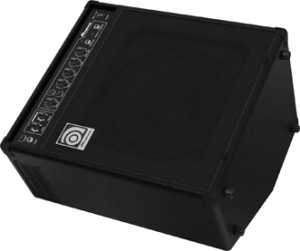 Get up to $100 back by Mail-In rebate on Ampeg Performance Series BA bass amplifiers! Click here for details.

With the Scramble circuit off and the EQ set flat, I noodled around for a few minutes to get a good sense of what kind of clean tone the BA-112 was able to deliver. From the get go, I was instantly greeted by the familiar round and aggressive tone that Ampeg amps are known for. It might lack some of the instant boom or warmth of the pricier lines but the character remains the in the same vein. Bold and articulate, the sound stayed tight even as I began to crank up the volume.

With the master knob at the mid position, the BA-112 was already getting plenty loud, certainly louder than you would need for a solo practice session. Pushed to it's 2 o'clock position, I was beginning to get the characteristic Ampeg break up, and levels more than good enough for a small gig. At max volume settings, the tone was aggressive and gritty but still retained a tight voice, a good sign that the amp has a capable amount of headroom. A common complaint with the BA-112 version 1 was the lack of power. It’s evident that bump up from 50 watts to 75 watts in version 2 was a direct move by Ampeg to fix that weakness. All in all, the BA-112 is certainly able to deliver levels more than good enough for home or band practice, and enough for small venues.

Another difference Ampeg made from version 1 was removing the 5 preset Style Switch. Personally, I don’t think many players will miss it. The amp sounds great with clean settings and any tonal adjustments -- such as scooping the mids, adding more boom -- can be easily done through the EQ section. The Ultra-Hi and Ultra-Low push buttons also add to the versatility, delivering on their intended promise. I tend to stay away from any extra buttons or knobs and prefer to carve my tone through an amp’s main EQ alone but I was surprisingly impressed with the sound the Ultra-Low button delivered. It was nice and boomy and retained the main character of my settings. The Ultra-Hi added a nice kick in the treble section but I found it a bit too punchy for my taste. Still, I can see how it would appeal to many bass players. For small little combo, the BA-112 definitely has a nice selection of possible tones up its sleeve.

And finally, we have the Scramble circuit -- a built-in (footswitchable) SVT emulator that is essentially the amp’s overdrive effect, consisting of a Drive and Blend knob. The Drive knob allows you to add the desired amount of break up while the Blend mixes it in with your clean tone. While it won’t replace your preferred dirt box, the Scramble circuit does a fine job at recreating the aggressive sound of a cranked up SVT head, although not nearly as warm and polished. With the both the Drive and Blend knobs at their mid position, the sound was nice and overdriven while still retaining a good amount of articulation. At their maximum position, it was a gritty mess but not nearly as muddy as I was expecting. While I can't see myself using the Scramble circuit too much in a live setting, I have to admit that it was surprisingly fun to mess around with. I would imagine that most players that want a bit of dirt on their live bass tone will be happy with leaving the both on near their mid position, if not a little lower.

Don't let the small size or budget friendly price tag fool you. The BA-112 bass combo has the heart and soul of an Ampeg amplifier, even if it doesn't always hit the very high marks of the pricier Ampeg models. For under $300, you get a solid, capable combo bass amplifier that is easy to use, features a versatile amount of possible tones and performs admirably even when cranked near its max volume. Add in the nice extras such as MP3 input, headphone output, a slanted edge design and a limited but admittedly fun built-in overdrive section, and you have a nice little workhorse bass amp. If you're in the market for an at home jamming bass amplifier, something for band practice or a portable friendly combo for small coffee-shop style gigs, do yourself and your wallet a favor and give the Ampeg BA-112 a serious look.

If you have any questions regarding the purchase of the Ampeg BA-112 Combo Bass Amp or any other piece of gear, don't hesitate to chat with one of our friendly PAL pros by using the live chat feature below or by calling us toll-free at 1 877-671-2200!

How often do you use any extra features on your amp? Are they absolutely necessary for your sound?