There are plenty of important things to consider in an acoustic, electric guitar or bass, one of which is the method of neck attachment. There are essentially three ways that most of today’s guitar and basses use to attach a neck to a body. The first is known as neck-through, or through-body, the second is set-neck and the last one is referred to as bolt-on. Not only do each of these methods affect the sound and playability of the instrument, they can also affect the look, price, strength and the difficulty in which connected problems can be fixed. Let’s take a closer look at each of them.

Among all three of the designs, this is by far the most elaborate. In this case, the wood used for the neck spreads the length of the entire body. Technically, this means that it isn’t the neck that’s attached to the body – the neck is the body – and everything else from the fingerboard, pickups, strings, and bridge are attached to it. The sides of the body are then affixed to this central core with glue. This type of attachment is common with high-end instruments, especially bass guitars. And seeing as how it’s basically a one-piece construction, neck-through attachments are especially sturdy and also allow easier access to the upper frets since there’s no need for a neck heel. They also allow for great sustain and intonation.

Unfortunately, this method is also much more difficult to produce than set-neck or bolt-through necks, making them more expensive. Another drawback is if the neck gets seriously damaged, due to the one-piece construction, the entire instrument is more or less done for unless of course, you’re willing to spend a good amount on major repairs. And even then, it probably won’t be as good as it was originally.

This method is based on a two-piece construction where the neck is glued to the body on a tight fitting joint and is a common choice for many acoustic and electric guitars. Although it’s not as elaborate as a neck-through, it’s also not as expensive. The strong connection between the neck and body gives guitars employing this method good access to upper frets, warm tone, and good sustain. This type of connection also means that it is difficult to service and repair, unfortunately. Another drawback of this method is the inability to change the neck-to-body angle – unless of course, you’re willing to pay an experienced guitar repairman a good deal of money to disassemble and re-glue it. 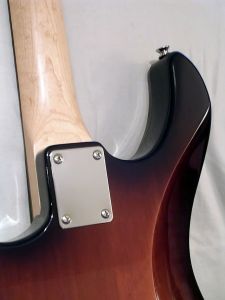 Out of the three methods mentioned, the bolt-on is by far the easiest to mass produce, the least expensive to maintain, repair or replace and the least difficult to adjust, making it a very attractive choice for many manufacturers. As far as the bolt-on design method goes, it is exactly what the name entails; the neck is bolted on to the body, creating a neck-body connection that is as strong and tonally pleasant as a set-neck design. Regular adjustments can be easily done and just in case the neck sustains serious damage, it can effortlessly be taken off and another one bolted on in its place.

There are a few different bolt-on methods used. Taking Fender, for example, the company has almost always used a four-bolt attachment method with a tight-fitting joint, along with a steel neck plate to evenly distribute the pressure. However, Fender did use a three-bolt method for several of their models during the ‘70s. Even though the company pretty much went back to the four-bolt design for all of their instruments by 1981, the three-bolt design was later brought back for several current Fender reissue models, such as a handful of Classic and Classic Player series Telecasters as well as the American Vintage series ‘70s Stratocaster and ’75 Jazz Bass.

There you have it, the three most common neck attachment methods, each with their own pros and cons. Whether you’re looking for the elegance and strength of the neck-through, the ease-of-use of a bolt-on or something in between with the set-neck, you'll be sure to get the best deal around on a brand new bass at ProAudioLand!