Strings don't last forever. In fact, they tend to dull out and lose much of their tone long before they even have a chance to break. One way that manufacturers try and combat this is by coating the strings. Sure, it extends their life by protecting them against the dirt and oils that normally wreak havoc, but that protection can come at the expense of tone. In comes Elixir Strings, a company who's spent the last 20 plus years refining and perfecting the formula for a coating that can significantly extend a string's life while maintaining a great sound. With that in mind, we decided to take a closer look at the popular string manufacturer as well as highlight a few of our favorite products. If you've never played with a set of Elixir Strings, we highly recommend it.

Founded in 1995, Elixir Strings is one of the top players in the industry, widely known for their signature coated electric guitar, acoustic and bass strings -- but they didn't initially start out that way. While they were working with guitar strings since the beginning, they were actually used as cheap testing material for push-pull cable designs. As part of this design research, they would coat the strings with polytetrafluoroethylene -- the same material that Teflon is made out of -- which actually worked pretty well as a cable. Naturally, a member of the team got the bright idea of using these coated strings on an actual guitar. Unsurprisingly, they sounded awful -- but the idea of creating a coated instrument string that could retain an awesome tone was born.

After thousands of prototypes, hundreds of guitar players testing them out in live situations and countless tweaks, Elixer finally released their first series of strings in 1997. Two decades later, they are the premier coated string manufacturer with countless users around the world, both professionals and weekend warriors alike. Elixer strings are available in three distinct coatings -- Polyweb, Nanoweb, and Optiweb (only available in electric guitar strings). While all three offer the same protection against degradation and extend the life of the strings, they differ in tone and feel.

Polyweb - Warm tone with a slick and fast feel. 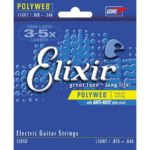 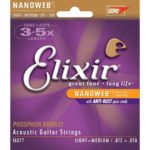 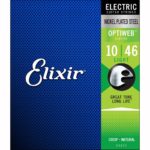 If you've been avoiding coated strings because of the reputation they have of on their impact on tone, do yourself a favor and give Elixir Strings a try. With years of research and fine-tuning, you'll be surprised at just how great they actually sound. And best of all, they offer the longevity and protection against dirt and grime that uncoated strings just can't provide.