Packing great tone, superb versatility, and top quality hand-built craftsmanship, Walrus Audio pedals don’t just offer ways to color your instrument’s sound, but an assortment of tools that push your tone to the next level. From the Janus Fuzz/Tremolo and its unique yet intuitive dual joystick controls to the insane amount of sonic possibilities packed into the Descent Reverb, Walrus Audio effects never fail to impress or surprise us. We really can’t recommend them enough. Below is are just a few of the effects that Walrus Audio has to offer. 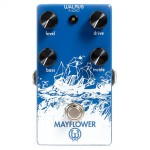 Crafted to combine the performance of the Universal Audio 1176 with the simplicity of the Ross and Dynacomp, the Deep Six is a studio-grade compressor in stompbox form. Offering a Level, Sustain, Attack and Blend control, the Deep Six offers unmatched versatility at a great price. The Deep Six also offers a Blend and Attack control which allows you to use the pedal with active pickups or humbuckers. The Blend feature, in particular, allows you to dial out any distortion that might be present when using high output instruments. Other notable features include a polarity correction circuit, making problems with polarity a non-issue. All in all, a versatile compressor with plenty of value. 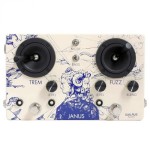 The dual joystick design on the Janus isn't just for looks: they offer impressive and intuitive control of your sound, allowing you to create a landscape of distorted textures and out of this world tones with remarkable precision. While both the Tremolo and the Fuzz can be isolated and used alone, they shine when used together in series, creating thick textures with a lot of movement. Each joystick offers a separate X and Y axis with their own designated controls: The Tremolo joystick controls the rate and depth while the Fuzz joystick controls the amount of fuzz and tone. Other features include individual Volume controls for both effects and a Blend control for the Fuzz that allows the user to mix unaffected signal with the effected fuzz signal. With the Janus, you get a pedal capable of sounds as unique as its design! 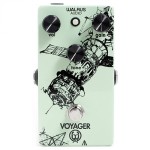 The Voyager is a no fuss, dual-threat overdrive/preamp workhorse capable of a full spectrum of tone that never gets muddy while boasting easy yet intuitive controls. At lower gain settings, it brightens the signal and adds clarity to each note played. And with the gain turned up, the Voyager really kicks things up, transforming your tone into a thick overdrive, providing impressive depth to chords while retaining the clarity needed to break through on solos. From its lowest to highest settings, the Voyager provides a uniquely superb amount of clarity that suits almost any style of playing. An overdrive/preamp pedals for players who aren't looking for any cheap tricks, just pure, clear tone. 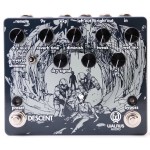 Designed to create a wide range of ambient sonic textures, the Descent is a three-mode reverb system boasting eight independent controls that allow you to precisely hone your perfect reverberated sound like few other pedals can. In Hall mode, the Descent features a classic reverb sound that can move your signal from a small-room-echo to a hauntingly long hall-echo. Reverse mode smoothly flips your signal to playback unique responses and can be manipulated with pre-delay time controls. Shimmer mode highlights the dry signal while adding in a full octave up and down into the mix to create a very distinct symphony of sound. Other features include support for most on-the-shelf expression pedals along with the ability to feed +1 and -1 octaves into the reverberated signal in all three modes. From thick and endless hall reverbs to rich symphonic shimmers, the Descent was made for players looking for a reverb pedal that packs an impressive amount of sonic possibilities and precise controls in one good-looking package.