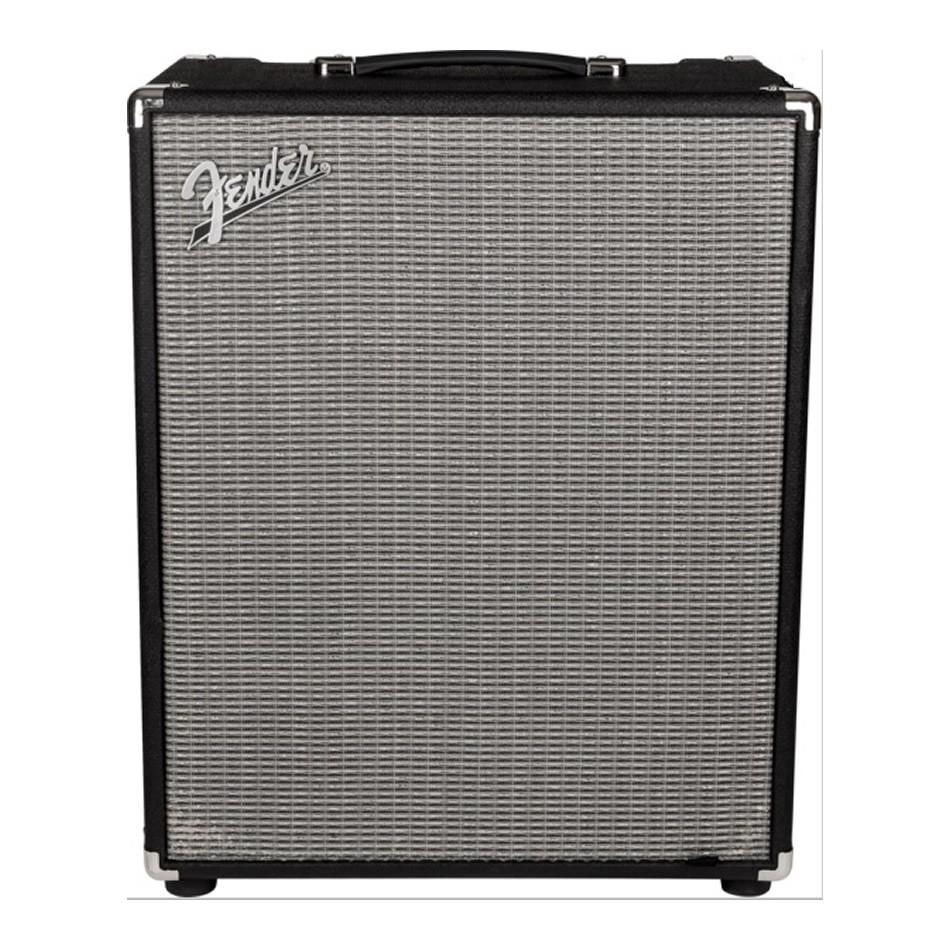 With the Rumble Bass series, Fender set out to create portable-friendly, lightweight bass amplifier line that didn’t sacrifice overall loudness and tone. With several combo models in the series, ranging from the small 15-watt Rumble 15 all the way to the 500-watt Rumble 500 – along with Rumble 200 / 500 heads and 115 / 410 cabinets – bass players interested in the line definitely have a lot to choose from. Today, we take a look at the biggest amp in the series, the Rumble 500.

From the get-go, it’s obvious that the quality of the amp is very high. From the sleek, classic look to solid construction, the Rumble 500 is definitely a great looking amp. Featuring a tough plywood frame, metal front panel, black textured vinyl covering with a silver grille cloth and a red LED pilot light jewel, the Rumble 500 looks exactly how you would expect a Fender amp to look like. 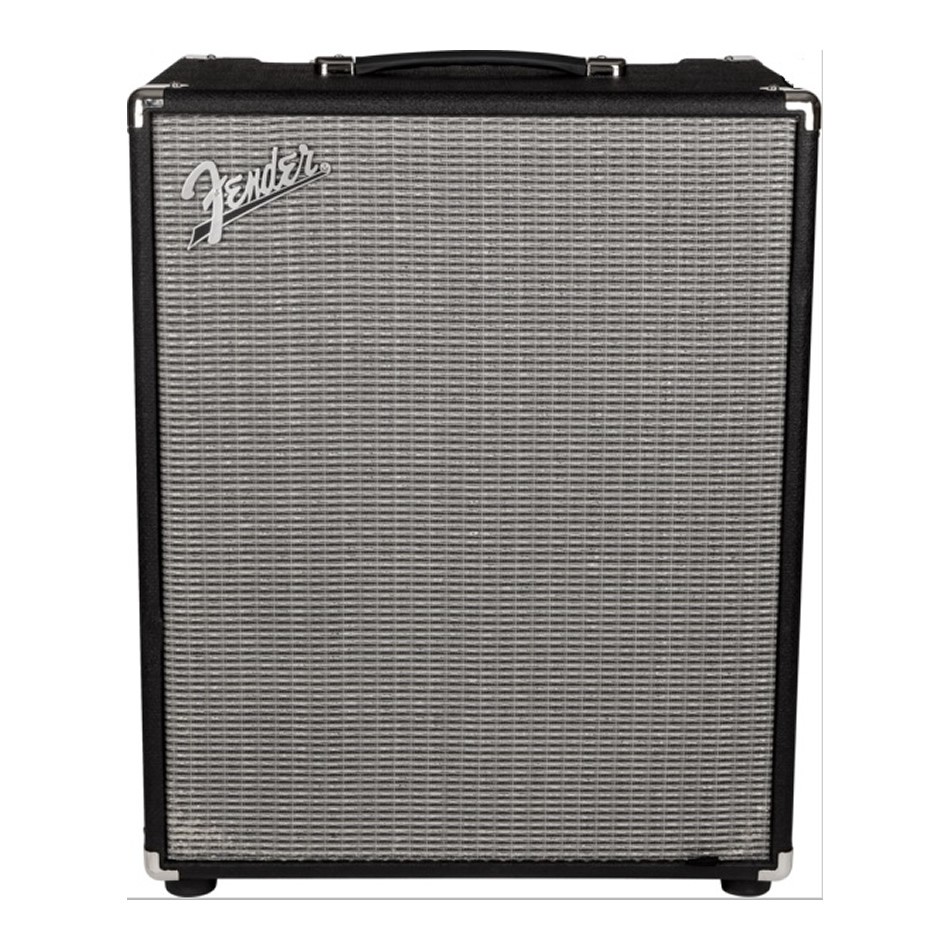 But seeing as how the combo was made to be powerful yet portable, the first thing I did when I got my hands on the amp was to pick it up. As soon as I did, it was immediately evident that Fender delivered on one of its two goals. Despite its plywood frame, the Rumble 500 is a deceptively light amp. 36.5 lbs. to be exact – something pretty much unheard of in the early days of bass combo amps and still on the lighter side even today. I’m rarely the strongest guy in the room but I am able to easily carry the Rumble 500 with little effort. In fact, most players should be able to carry the amp with one hand if they wanted to.

Aside from a solid build, the Rumble 500 also ships with a good amount of features and control settings. The bulk of the sound is dialed in using a standard fare of EQ knobs – Bass, Low-Mid, High-Mid, and Treble – along with Gain and Master Volume settings, each working as you would expect them to. And then we have the built-in effects toggles: Bright, Contour, Vintage and Overdrive, the last of which also features two further knobs labeled Drive and Level.

On the back of the Rumble 500, you'll find an Effects Loop send and return jacks, headphone jack, auxiliary input, optional footswitch, an external speaker output and an on/off switch for the included horn tweeter. 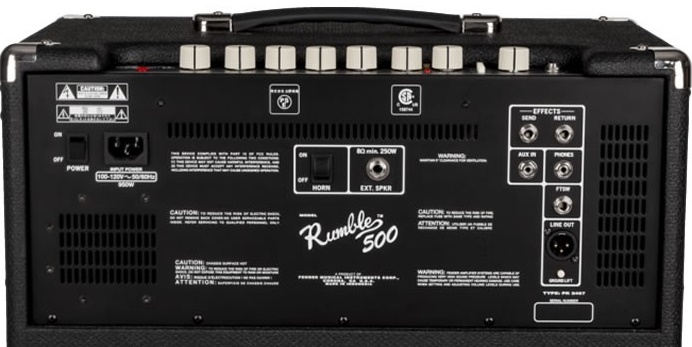 All in all, the Rumble 500 isn't the most feature-rich bass combo I've come across but it has the important essentials and some nice extras, more than enough to keep most bass players happy.

The sound of the Rumble 500 is powered by a pair of 10" Eminence speakers. And when you add the ability to use an external speaker, you can see that the amp can potentially put out a lot of power. But all that means nothing if tone and clarity are sacrificed in the process. Fortunately, that isn't the case with the Rumble 500 as it remains strong and articulate, even as the Gain and Master knobs are set near the max. Even with the bass response dialed up, the Rumble 500 remains strong and articulate, and plenty loud for most gigs.

The four EQ knobs work great, allowing you dial in the precise tonal response for your setup. Whether you're the type of player that needs a lot of oomph in the low-end or prefers a brighter attack, the Rumble 500 delivers. While the main controls work great, the included effects and voicings are a bit less useful. The Bright setting works as intended, giving the amp some high-end emphasis, but it seems to do so at the expense of the low end. The Vintage setting adds a smooth layer fuzz to the overall sound while the Contour option compresses the tone a bit. And as for the Overdrive, it works as intended but if you're the type of bass player that uses OD in their sound, it probably won't replace a dedicated pedal. While it’s a nice touch that Fender added these features, I can’t say I see myself using them much. Still, the core sound of the Rumble 500 is great on its own without any need for those extras.

If the two goals Fender set out to achieve with the Rumble series was portability and power, they definitely succeeded with the Rumble 500. Featuring 500 watts of power, (mostly) useful extras, a great range of tonal possibilities and a sound that remains clear and articulate even when pushed -- all in an amp that weighs only 36.5 lbs. -- the Rumble 500 is definitely a combo amp worthy of the Fender legacy!

For more information on the Rumble 500 or the rest of the Rumble line, check out the links below. And if you have any questions regarding the purchase of this or any other piece of gear, don't hesitate to chat with one of our friendly PAL pros by using the live chat feature below or by calling us toll-free at 1 877-671-2200!

Is weight an important factor for you in choosing an amp?