Fender amplifiers are world renounced for their high-quality components and amazing tone. From the early tube amps that created what we now know as “American Tone” to the modern versions that remain in heavy use today, Fender amps are an integral part of rock history. Today, we’re going to take a quick look at one of their more iconic early lines, the Tweed series.

While it’s more or less official today, the “Tweed” designation was actually a term used solely by players to describe the Fender line of amps made between 1948 and 1960, due to the appearance of the cloth covering (although it was actually varnished cotton twill). The Tweed series was responsible for making a name for Fender amps due sound quality and appearance. First used in early 1948 on the Dual Professional model (with only 400 of them were made), they remain highly collectible to this day.

Most of these early models were referred to as “TV-Fronts” mainly due to the cabinet shape when viewed from above. The Dual Pro was first amp to use finger-jointed pine cabinet, twin speakers and a top facing control panel. Their construction was changed as well, and their chassis was mounted to the back with its tubes pointed down. This provided easier access to the inside while providing a strong top.

Twill covering was discontinued in 1960, though Fender still covered the Champ in twill until 1964. The first-type used an off-white fabric, which was followed by two-tone horizontal-stripe pattern, and finally a unique two-tone twill. 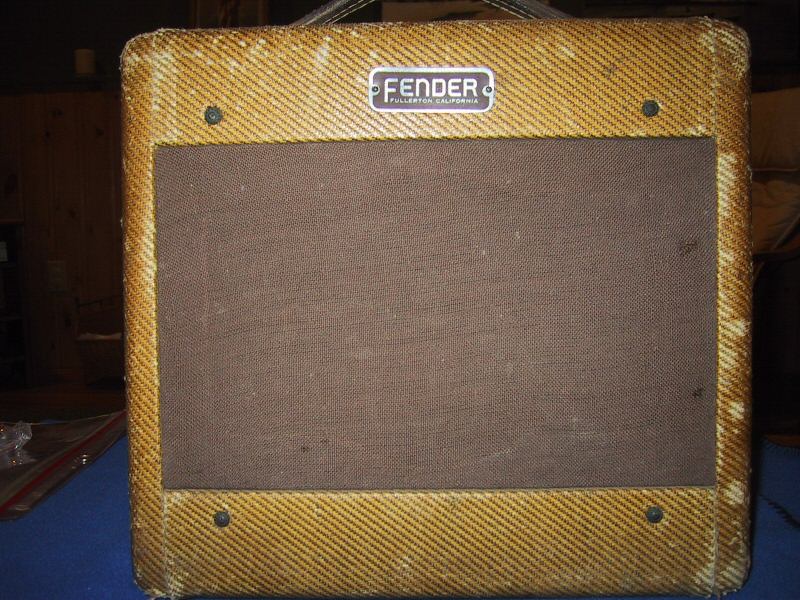 Beginning in 1990, Fender began to utilize the tweed covering once again, starting with the '59 Bassman Reissue. Some later amplifier models came in the split option of tweed or black tolex covering, including the Blues Junior and Pro Junior. The Fender Blues Deluxe and Blues DeVille and their later reissues were also available in tweed, as well as the Custom Shop reissues of several of the Tweed Era amplifiers.

In 2012, Fender introduced its first "Signature series" Tweed models in collaboration with Eric Clapton. This "EC" series included the Vibro-Champ, based on the five-watt amplifier (allegedly) used for the recording of Layla and Other Assorted Love Songs.

While there is plenty more to jump into when it comes to the Tweed line, we did say it would only be a quick look! We'll be taking a look at other famous Fender amp lines in the near future so stay tuned!

Have you ever used a Fender Tweed amp?