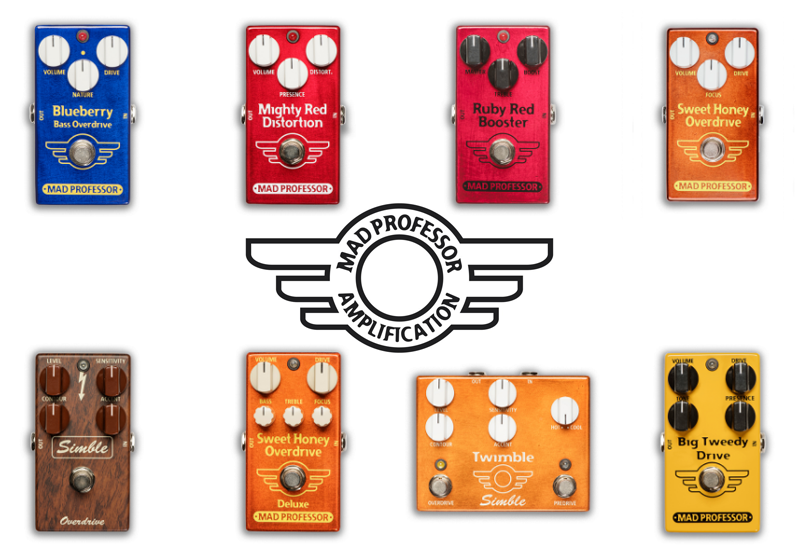 Founded back in 2002 in Finland by Harri Koski and Jukka Mönkkönen, Mad Professor are still relative newcomers to the effects pedal industry, especially when you consider that guys like Dunlop and Boss have been at it for decades. In fact, they are probably better known for their popular amplifier line more than their pedals, but that hasn’t stopped their effects from receiving a lot of mainstream popularity as of late. Today, we're taking a look at a few of their of pedals, specifically those focused on distortion, overdrive and boost. 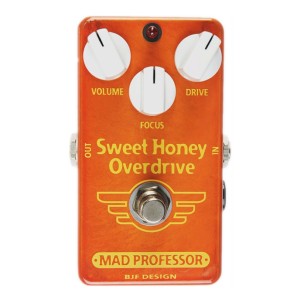 Designed to offer tube amp-style overdrive that reacts to the dynamics of your playing, the Sweet Honey OD sounds great in almost any of its settings with minimal to no background noise and an overall tight sound. And like most of today’s overdrives, your signature tone is never compromised – only refined. While the Sweet Honey is best suited for classic blues and rock, it can also get a bit heavier when combined with an overdriven amp channel. From the way it seamlessly reacts to the little touches in your playing dynamics to its straight-forward, no-nonsense ease of use, the Sweet Honey OD definitely deserves a spot on pedalboards everywhere. 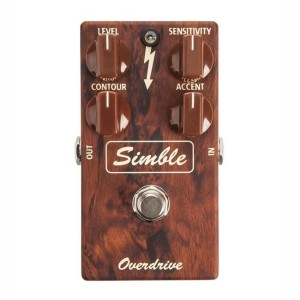 There are players out there that want an OD that can provide a touch of color to their tone. Then there are players who want an OD that delivers the most natural, organic tone possible. The Simble Overdrive is tailor-made for the second crowd, delivering a completely transparent, organic overdrive with impressive dynamic range and plenty of subtle nuances reminiscent of vintage boutique ODs that go for thousands. With great touch sensitivity, amazingly warm tube-like compression and the most organic boost possible, it's a great pedal. The Simble OD provides a deep richness that most ODs just don’t deliver, able to give your guitar's natural tone anything from a slight clean boost, a touch of grit or a bright and dirty attack, all of which sound great. And with the Simble's extended headroom, you'll rarely have to crank it to full blast before getting more than enough boost. Works great with both guitar and bass. 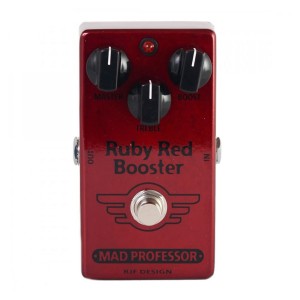 At its core, the Ruby Red Booster consists of three sonic components -- two types of boosters and a switchable buffer, making it one versatile booster. Starting with the buffer, Mad Professor included a high-quality unit that can be switched on or off, allowing you to use the Ruby Red Booster in traditional “Buffer Mode” or on true bypass mode. The boosters themselves are based off the highly popular Bearfoot FX Red Rooster Booster and LittleRed Trebler, connected in that order along with a master volume control. Being two boosters in one, the Ruby Red Booster can be used as either a clean, transparent booster or a dedicated overdrive, perfect for sending your tube amp into distortion. The booster circuit is designed to overdrive the amplifier inputs and give it everything from nice shimmer to heavy overdrive, thanks to the massive 40dB of boost. The booster is tuned so that it produces musical distortion by itself on higher boost settings. As far as controls go, you can control the total level of desired boost through the master volume (which can also be used for distortion), making using the Mad Professor Ruby Red Booster as easy as it gets. 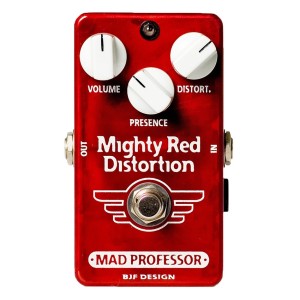 If you’re a fan of ‘80s-style compressed high gain tones, do I have a pedal for you -- the Mad Professor Mighty Red Distortion. Built from the ground up to capture a sound that defined a generation, the Mighty Red Distortion can give you everything from GNR to Iron Maiden and more. I’m talking heavy distortion with enough clarity to maintain string to string clarity to light distortion perfect for mixing with reverb, delay or many other effects. And best of all, it does so with an extremely low signal to noise ratio thanks to the patented amplification techniques that do not involve any noise gates or expanders (which can have a negative impact on signal purity). This gives the Mighty Red Distortion a natural sound not seen with many other digital-based transistor pedals. As far as controls go, the Mad Professor Mighty Red Distortion keeps things simple and no-nonsense -- Distortion, Volume, and Presence -- making it as easy to manipulate as it is fun to play.