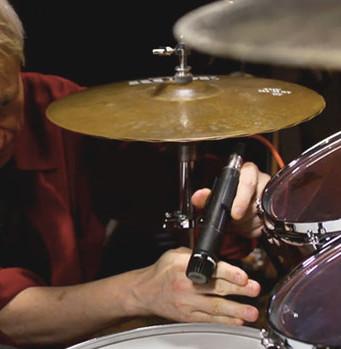 When it comes to live sound reinforcement, proper mic placement is crucial. The reason why it’s so important is because mic placement will influence three critical attributes: the signal to noise ratio, gain before feedback levels and the overall tone of the sound source. Below, we'll look at how mic placement can influence each one of these and give you tips on how to get the best results possible.

In a live situation, the best way to get a good signal to noise ratio is by using a directional microphone, such as a cardioid mic. If properly placed, directional mics can also reject sound coming from nearby instruments. They are also very helpful at reducing or eliminating any unintentional sound bleeding (for example, if a snare mic keeps capturing sound coming from a floor tom). As far as mic placement goes, you need to take advantage of the microphone’s angle of maximum rejection, which depends on what kind of directional mic you’ll be working with (we’ll look at that in the next section).

Using a mic’s angle of maximum rejection can also give you higher gain before feedback levels. In other words, how much the microphones can be amplified before you get any feedback, a property that is all too important in live sound situations. Before you can do this, you’ll need to know your mic’s polar pattern. Below you can see the pattern for the four most common type of directional mics -- cardioid, supercardioid, hypercardioid and bidirectional (or figure-of-eight):

The patterns above show where a type of mic is sensitive to picking sound. The key to finding a microphone’s angle of maximum rejection is finding where it is least sensitive. For example, in a cardioid mic, the angle of maximum rejection will be straight from behind while a supercardioid mic will have two spots slightly off to its sides at the 4 o'clock and 8 o'clock positions.

As far as placement goes, you can start by aligning monitors and amps so that they hit the mic’s angle of rejection while still capturing the desired sound source. Under normal circumstances, this will give you the maximum gain before feedback. While this can be tricky to achieve depending on the stage and the number of amps, instruments and monitors, the goal is to use the angle of rejection as best and as much as you can. Check out the two images below for examples using cardioid and supercardioid mics:

Be aware though that there’s a point when the reduction of background sound provided by the angle of rejection will no longer be enough to prevent feedback. In fact, every PA system will get feedback eventually if the levels are high enough. Take a quick look at the video below for info other ways to fight PA feedback.

Placement also influences the tone of the sound source you are miking. As for what that sound should be, it’s all a matter of personal preference. You might be going for something that sounds natural and balanced, or maybe something that is a bit more exaggerated. It all depends on what you’re after. The key here is to experiment with difference placements. Every mic is different and will respond in their own way to different positions.

Ideally, you still want to place the mic as close as you can to the instrument while maintaining the sound you are going for. The closer the mic is to the sound source, the stronger the signal will be. It will also help with reducing unwanted background noise from bleeding through.

If you’re using a mic with a directional pickup pattern, be aware of the proximity effect -- the increase in bass or low-frequency response when a sound source is close to a microphone. While the proximity effect can be used to your advantage to add bass and depth to the sound, too much can make things too muddy. If that’s the case (or you just don’t want the any added bass), simply move the mic a few inches away.

Hopefully, the info above has given you a good idea on how mic placement plays an important role in getting a great onstage sound. The next time you're having trouble with feedback, reducing noise levels or getting a certain sound -- you might just need to move your mics.

How often do you experiment with mic placement before a show?