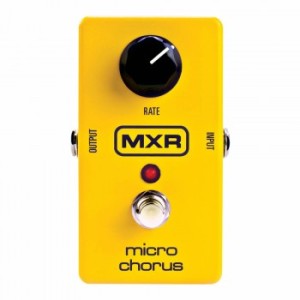 When it comes to effects pedals, you have your certain staples depending on what kind of sound you’re going for. One of the more diverse effects in terms of style execution is the chorus pedal, used heavily in pop heavy rock. Think of ‘80s new wave like the Bangles or the power ballads of ‘80s metal bands like Guns ‘N Roses and Def Leppard, although you won’t have a hard time at all finding modern bands using the same effect. Essentially, a chorus pedal clones the input signal and repeats it at very close intervals to make the output sound like multiple "voices," or in the case of the guitar, multiple chords or notes. When you adjust the rate, it simply makes the cloned signal repeat closer together or farther apart. Anyways, for those of you out there on the market for an easy to use chorus pedal that gets the job done nicely for less than eighty bucks, you’ll be hard pressed to find a better overall deal than the MXR M148 Micro Chorus pedal.

Those familiar with other offerings from MXR will be familiar with the size and execution of the Micro Chorus. Think of the Phase 90 and you’ll know exactly what I mean. The pedal itself is pretty light and the chassis feels like it can take a decent beating, although it doesn’t give you that same indestructible feel that some of the diecast pedals do. Even still, if this bad boy can last as long as my Vintage Phase 90, with all the drops and knocks it’s taken, it should easily last you well over ten years unless something with the electronics goes wrong, which is pretty rare anyway. As far as execution goes, it’s as straight forward as it gets. You have your standard input and output jack, the click switch to turn the effect on and off and a single knob labeled “Rate” for controlling the speed of the effect.

Just like your standard effects pedal, the MXR Micro Chorus can be powered by either a 9 volt battery or a 9V adaptor. It has decent amount of life when used with a battery but just like anything else, you risk having the pedal die on you during a gig, so make sure you have a spare or spring for the adapter if you don’t mind another cable. The Micro Chorus does offer bypass, so you’ll get your raw clean sound when the pedal is switched off but a little warning though, it’s bypass but it’s not TRUE bypass, meaning that if the battery dies or there’s no power, the signal is dead and you won’t get anything going to the amp (while a true bypass system will send the signal regardless).

The chorus effect of this pedal sounds better than you would think for the price. The tone is clear and clean and will not wash the raw sound of your guitar at all. For having one knob, the MXR Micro Chorus is actually more versatile than most would think. Set the rate knob at zero and you will get a mellow slow phase type of effect. Set it towards the middle and it speeds up or crank it to 12 ‘o clock to have a very nice shimmering chorus sound. Basically, from zero to 12 it will go from a slow phase type of sound all the way to a bright and faster shimmer. If you like that clean ‘80s type of sound this pedal will give you exactly that, although players who like to micro manage their effects will probably be put off by the pedals lack of control in that regard as the pedal only lets you control the speed of the effect, not the volume of the effect, tone, treble, etc. With that said, I had no problem with the amount of effect the pedal gives off and it pretty much works great at any setting thanks to its easy to use execution.

While the pedal won’t give you as much control as some of the more pricier chorus pedals, MXR did a great job at making the pedal easy to use, sound great and extremely affordable. Compare it to pricier pedals like the TC Electronic Chorus and you’ll see that the Micro Chorus is no slouch when it comes to sound quality, pretty much on par with each other as far as I could tell, although it won’t have nearly the same amount of tweaking options (at a price though, the TC pedal is about $300). Alright, so all in all, the MXR Micro Chorus is a great little chorus pedal with a great sound at an even better price. The build is nice and strong and should last you years. While it doesn’t let you shape the chorus effect as much as pedals that cost three times at much, the straight forward dummy proof execution means that you won’t have to worry about selecting “bad” settings as the MXR Micro Chorus will sound nice and balanced no matter what. For $79.95, there’s a lot to like here!

And don’t forget to check out the rest of PAL’s huge selection of effects pedals at great prices right here!