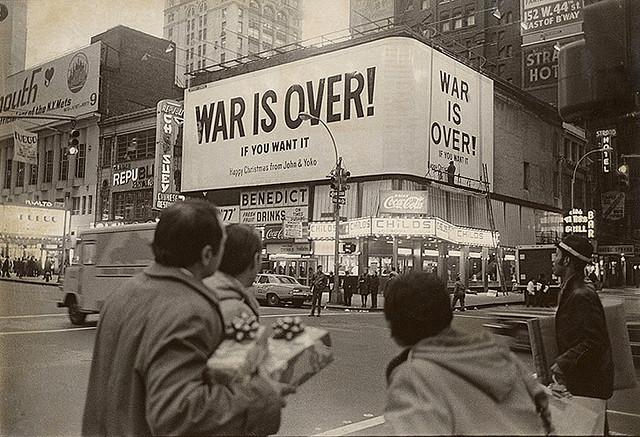 It's December and you know what that means – the holiday season is in full swing. It’s no secret that the holidays and music go perfectly together, who ever said that a great holiday song had to sound like it was being sung by a church choir? How about a little bit of that rock and roll guitar sound to kick up the spirit a few notches? Which brings us to today’s article; our picks for some of the best holiday inspired rock songs around!

Ah, nothing says Christmas like a department store Santa – especially when it involves a bunch of kids asking for stuff! First released in 1977, this Classic Kinks track tells the story of a department store “Father Christmas” who is beaten up by a gang of poor kids who tell him to give them money instead of toys since toys really wouldn’t help them out in their situation. They go on and ask that the toys be given "to the little rich boys" instead. There’s even a line where a child asks the narrator to give his dad a job. Although it might not be brimming with positive holiday cheer, it’s a rocking track with plenty of early punk overtones that will certainly give this Christmas a nice rock and roll kick in the pants!

Leave it to a post-Beatles John Lennon to craft an anti-Vietnam War song in the form of a holiday tune and make it into a Christmas standard. It was even voted the 9th favorite Christmas song in a poll done by VH1! Written by John Lennon and Yoko Ono officially, this raucous protest tune was first released in 1971 as a single by the Plastic Ono Band which was originally inspired by billboards taken out by the couple in 1969 which read “WAR IS OVER! (If You Want It) Happy Christmas from John and Yoko.” And although the Vietnam War has long since been over, the message of this song still hits home to this day.

Sure, Elvis has had his share of holiday inspired songs. Heck, he’s even got an entire album dedicated to them! But it was one certain song out of that entire 1957 LP – Elvis’s Christmas Album – that has since stood the test of time. I’m talking of course about the Billy Hayes and Jay W. Johnson creation, “Blue Christmas.” Although The King wasn’t the first artist to hit it big with that particular tune (country artist Ernest Tubb’s version hit No.1 on the charts during January of 1950), his version pretty much cemented the song as a rock and roll Christmas standard and a great addition to anyone’s holiday playlist.

Now this one’s a true Christmas classic! First released by one Bobby Helm back in 1957, this Joseph Carleton Beal and James Ross Boothe penned holiday tune has been a part of Christmas ever since. Although there have been numerous artists who have covered the song throughout the years, it’s the original version by Helm that is best known throughout the world. Taking lyrics and themes from that very popular Christmas standard, “Jingle Bells,” this song proved that you don’t have to be on Santa’s ‘nice’ list in order to get into the holiday spirit!

Written by Johnny Marks and Marvin Brodie, you know you have a rock and roll classic when you have Chuck Berry and his signature guitar skills thrown into the mix. First recorded by Berry himself back in 1958, it has seen numerous covers throughout the years from artists across the music spectrum including Los Lonely Boys, Joe Perry, Billy Idol, Cee Lo Green, Billy Ray Cyrus, Keith Richards and even late night talk show funny man Conan O’Brian. But it is Berry’s version that still rocks the radios of listener’s across the world every December.

Originally released on the 1963 Christmas compilation album, A Christmas Gift for You from Philles Records, this Ellie Greenwich and Jeff Barry-penned tune (along with help from Phil Spector) was first originally sung by Darlene Love and as far as I’m concerned, that’s the only person who needs to as this version is by far the most endearing of them all. Even U2’s 1987 cover doesn’t quite hit the holiday nail as much as the original. And you can be sure to catch Darlene sing her signature song on the Late Show with David Letterman on the final new episode before Christmas as she has done every year since 1986!

Christmas might get the brunt of the holiday attention but that doesn’t mean our Jewish brothers and sisters can’t get in on the holiday cheer themselves! Originally performed on Saturday Night Live during the show’s Weekend Update segment back on December 3, 1994, this classic song is as hilarious as it is memorable. Penned by comedian Adam Sandler along with SNL writers Lewis Morton and Ian Maxtone-Graham, the song centers around the theme of Jewish children feeling alienated during the Christmas season, and Sandler's listing of Jewish celebrities (both real and fictional) as a way of sympathizing with their situation. Even with all of the lyric changes Sandler has done over the years, it’s still very much a holiday classic!

Just like “Merry Xmas” perfectly describes John’s ear for the bigger, more important things in life, so too does “Wonderful Christmastime” portray McCartney’s knack for writing cheesy but wonderful little tunes. In fact, McCartney himself was originally embarrassed by the song when it was originally released as part of McCartney II back in 1980. Known for its heavy use of synthesizers along with its fair share of studio experimentation, it is now pretty much a Christmas standard on most classic rock stations. Too bad the b-side to the song, “Rudolph the Red-Nosed Reggae,” didn’t reproduce the success.

Well, there you have it -- our picks for the top rock songs for the holidays! While there are plenty more to choose from, the tunes are especially memorable for us here in the office. With that said, have happy holiday season!

What are some other great holiday rock songs?