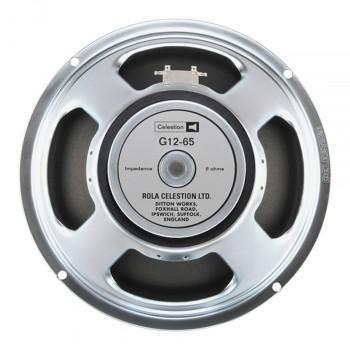 Speaker breakup refers to a tonal feature that happens when they are pushed past a certain limit. While many believe that a speaker's power rating is a contributing factor to speaker breakup, that's simply not true. True speaker breakup depends on the cone density and the interaction between the top plate thickness and the winding height of the voice coil. It also depends on a speaker's Xmax rating (also known as a speaker's Maximum Linear Excursion), which is essentially the height of the voice coil overhang below and above the top plate and magnetic gap.

Let's say that you have a speaker that vibrates as one piece below a particular frequency, 900hz for example. Above this frequency, the cone begins to vibrate in sections and the speaker is pushed to where less and less wire is in the magnetic gap. The result is essentially comb filtering (along with other little tonal abnormalities), giving the speaker's sound a slightly different texture. It also just so happens that this all takes place between 1Khz and 4Khz, a range that our ears are particularly sensitive to.

If you don't know much about speaker anatomy, this can be hard to comprehend, but think of it this way; the higher the Xmax rating, the harder you will need to push the speaker in order to encounter breakup. This is because more distance is needed to send the voice coil out of the magnetic gap. It's also important to consider that when it comes to guitar amp speakers, they all tend to have a low Xmax rating. And because they do, the way you figure out if a certain guitar speaker will break up earlier than another is not by its Xmax, but by knowing which one has a lighter, thinner cone. Unfortunately, manufacturers rarely (if ever) release this type of specification for their cones, meaning you'll have to rely on suggestions from other players or your own ears.

You can consider the rate of speaker breakup as another tool in getting your ideal tone. If your distorted tones are a little harsh or ratty, you can try a cleaner speaker that doesn't experience breakup as early. The cleaner speaker will be able to hold together better and longer, producing a more articulate sound. You can then use your amp or pedals to get your overdriven tone.

But maybe you have a different problem. Maybe you're just not getting enough distortion at lower volumes. In this case, a speaker that breaks up earlier might be just what you need. In fact, you might find that you like a particular speaker's breakup tone (some of them can sound very nice). There are even players out there who have learned to use their speaker's breakup characteristics to their advantage. Instead of touching their amp, they just use the volume knob on their electric guitar and change their pick attack to get exactly the tone they're after, exactly when they want it.

Hopefully, the information above has given you a good idea of what speaker breakup is all about and how it can be an effective tool in finding your ideal tone. As always, never stop listening and taking a closer look at all the links in your tonal chain. By finding out exactly what could be improved, you can take one step closer to your ideal tone.

If you're looking to upgrade your current amp, we have a wide selection of guitar speakers at the best prices around. You can browse our speakers by using the link below. If you have any questions regarding any purchase, don't hesitate to chat with one of our helpful PAL pros by using the Contact Us dialogue box below!

Did you already have a good idea about speaker breakup before this article? If so, do you use it in sculpting your tone?