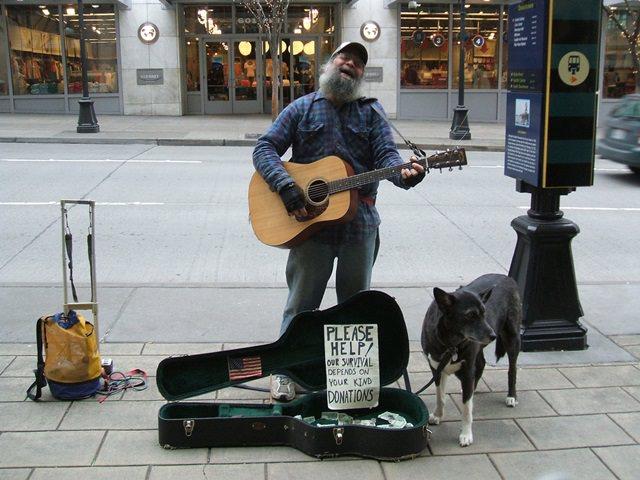 Many of the musicians are not aware of the laws and legalities of the street performing. As the result, they face some unpredicted situation while performing on the street. Even if they know the laws, they cannot convince the legal authorities when they try to arrest them for the street performance. A recently circulated video of the street performance done by Andrew Kallen shows that how he got arrested for busking in the New York City subway system. His arrest has created many speculations and concerns in the busking community.

His arrest clearly shows that there is a lot of ignorance about the law and you cannot help it with the right document. You might think that you will not be arrested as you have some required document. But the reality will be different.

This video proves that even if you have the right information but still, you will not be allowed to play on the street. The best way to deal with this situation is to carry a copy of relevant law document.

Yes, it is legal. It was widely practiced. But after the 9/11 terrorist attack, it became restricted to some extent for the security reasons. Now many laws are enforced to regulate busking. If your area does not have a strict anti-busking law, you are allowed to perform on the public property without creating a nuisance and obstructing the people. If the local authorities tell you to leave the place, then it is better to leave that place if you do not have any legal document.

If you want to perform on the private property that includes the fairs and open-air markets, then you will have to take the permission first. You need to check the ordinance of the town where you want to perform and should also take the print outs of the rules and laws that protect you. Go through the details of the ordinances first and follow it carefully to avoid any complication or arrest.

Do you need some legal document?

You might need a permit or some other legal document for busking. For the different states, there are different laws. In some places, you might require a permit. For obtaining permitting, you will have to go through auditions. Some states allow the auditions once in a year only.

London’s Underground offers a limited number of licenses after the audition. The auditions take place once in a year. New York City allows the un-amplified busking in almost all the places except within fifty feet of the monuments. You can also perform on the subway platform but you should not step onto the train. Chicago demands a permit for the public performance with noise limitations and for designated hours. Boston demands a criminal background check, audition, and liability insurance for the performance.

How can you get the help?

Even if you have permits to perform on the streets, you are not allowed perform in the metro station and subway. You will find some specific rules and regulations for every place. To get the details, you can go online. You will get the details of the links below.

Followings are the links to some organizations they are trying to promote the busking and help the buskers with the relevant and required information. You can visit thebuskingproject.com and buskercentral.com. to know more about the street performance legalities. Protect yourself with all the relevant information to combat ignorance and to use your right. With the right knowledge, you can make a better place for you to live in.

Busking is not illegal. It is allowed by the law. But the important thing is that you should know and understand the specific requirements of your city to perform legally in that part. While planning street performing, always protect yourself with the required legal documents and understand the legal complications to protect you from arrest and other legalities.