The Difference Between Overdrive And Distortion

If you were to ask ten different musicians about the differences between distortion and overdrive chances are you’ll get ten different answers. They will all most likely do it by trying to describe what each sounds like. In other words, they will be describing the effect’s tonal qualities rather than what it is technically doing to a guitar signal. Still, the line between distortion and overdrive tend to blend together so much that it’s pretty hard to draw a line between the two, especially when it comes to effects pedals. In this article, we take a closer look at these two popular effects from inside and out in order to give you a clearer picture.

First, let’s look at the two terms, but from the perspective of an amplifier. The simplest way to explain overdrive is what occurs when input gain exceeds the capacity of a device to handle the amount of gain thrown at it; in this case, a tube. What happens is that the smooth waveform that goes into the device gets “clipped” because the device’s input capacity is less than what is being thrown at it. Sonically, we perceive the result of this clipping as distortion. The higher the amplitude of the wave, the greater amount of distortion we hear. There’s been a lot of confusion about these two terms because they’re used so loosely, and oftentimes interchangeably.

A way to think about overdrive vs distortion is that overdrive happens in the front-end (what you put in) while distortion happens on the back-end (what you hear). But here’s where we get into a bit of murky territory, especially with pedals. If we’re talking about overdrive as simply overpowering the front-end of an amp to make the tubes clip, the only pedal that is technically an overdrive is a boost pedal that takes your guitar’s signal and ups it voltage. But lots of manufacturers call their pedals overdrive pedals. In reality, most of those are technically distortion pedals – this includes the popular Tube Screamer. 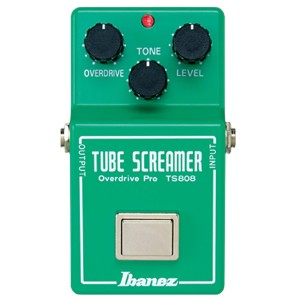 We break down the differences between three popular Ibanez Tube Screamer models - the TS808, TS9 and the TS9DX.[/caption]

So how do you tell the difference? Well, it’s still a bit murky but as a rule of thumb, a distortion pedal will create a distorted sound irrespective of the amp and its settings. In other words, it’ll clip on its own. Put it front of the clean channel of an amp, switch it on, and it’ll create distortion. However, many, if not most, “distortion” pedals also provide a bit of gain boost to overdrive an amp. That’s where it gets murky, as most of the pedals termed “overdrive pedal” function as a combination of both overdrive AND distortion.

There are no clear cut rules but in general, most pedals that are commonly known as overdrive pedals (Tube Screamer, etc.) employ what’s called a “soft-clipping” circuit or transistor where only a small portion of the input signal is clipped. Most distortion pedals employ a “hard-clipping” device to severely clip the input signal to get that “square wave” tone. But as mentioned above – there are no hard and fast rules. So which kind of pedal to choose? The best answer is it depends on what you’re after with respect to your distorted tone. I know that this is a rather ambiguous statement, but again, there are no hard and fast rules. In the end, you should choose based on what sounds good to you. But there are a couple of good guidelines to follow.

Which Effect is Right For You?

If you have a tube amp and just want distortion purely from overdriving the tubes, then a booster pedal is probably what you’re after. There are several kinds of boosters, many of which are made to only boost a certain frequency range. For example, if you prefer a clean, transparent boost that has a flat frequency response so that the distortion that occurs is strictly based on your amp’s own tone, you can use a booster in conjunction with your amp set just at the edge of breakup. When you switch it on, not only will you get a volume boost, you’ll overdrive the pre-amp tubes. And depending upon how much gain you throw at the amp, you’ll get the power tubes working as well.

If you want to add a bit of color and overdrive your amp, then a soft-clipping pedal like a Tube Screamer works quite well. Tube Screamer-type pedals typically give you a midrange boost that results in a much warmer and smoother distortion. Many also add sustain and a bit of compression to simulate power tube saturation at any volume.

If you want to get a distorted tone at any volume, then a distortion pedal is the way to go. There are lots of these on the market. A popular model to look at is the Way Huge Fat Sandwich. It’s a full-sized pedal with plenty of versatility. If a distortion pedal is still not enough gain for you and are looking for more of a hard-clipped, super compressed type of distortion, a fuzz pedal will get you there.

You can also chain overdrive and distortion effects to great success. It’s actually done quite a bit because you get colors that you can’t get with just your amp. One thing that musicians do regularly is to use an overdrive pedal to push their amp hard, then when they want to get more tube compression and sustain, they slam the front-end with a booster. This doesn’t result in a volume boost because the tubes are already saturated, but you do get much more gain-driven sound, and that can really work well with solos.

You can check out our entire selection of overdrive and distortion pedals right here! And if you have any more questions or need some help deciding on what gear is right for you, don't hesitate in chatting with one of our PAL pros by using the Contact Us button below!

What are some great overdrive or distortion pedals that you would recommend?