The Various Picking Styles For Guitar 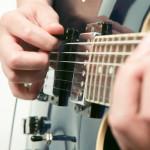 Guitar playing may generally be divided into two basic types: fingerstyle and picking (often called flatpicking). Both are basically self-explanatory, although several ways to play to can be listed under each category. Here we’ll look at picking styles for acoustic and electric guitar.

The terms picking and flatpicking are somewhat interchangeable, although flatpicking is most often used in describing traditional bluegrass and country music played on a flat-top steel-string acoustic guitar. Nonetheless, flatpicking in a more broad and simple sense can denote many techniques in which an acoustic or electric guitar is played using a pick held between thumb and fingers to sound the strings. The term typically doesn’t apply to playing with finger and thumb picks that are worn rather than held; a method that more properly falls under fingerstyle.

Call it what you like—picking or flatpicking; in any case, a short glossary of several picking methods follows here.

Alternate picking. The most common type of pick playing, alternate picking uses alternating down and up strokes. It enables fast-paced passages to be played fluidly—most scale runs and solos are accomplished with this method. Alternate picking is used in almost all styles of picked guitar music, including rock, jazz, bluegrass, country, R&B, heavy metal and thrash, and it’s also frequently used on bass guitar.

Crosspicking. A common bluegrass guitar and mandolin technique that uses a rolling syncopated style across three strings, similar to the method used to play banjo rolls (i.e., down-up-up/down-up-up or down-down-up/down-down-up). The three pitches are usually played on three adjacent strings, one per string. The pick direction can vary depending on the required emphasis and the melody.

Downpicking. There would be no metal and no Ramones without downpicking. It’s pretty self-explanatory—the pick is used mostly (if not only) for downstrokes—and it can look and sound very aggressive, tight and heavy, which is why so many hard rock, punk and metal players use it so prominently. Downpicking isn’t usually as fast as alternate picking, and it can be murder on your picking hand and wrist unless you simply buckle down and develop sheer endurance, but it’s easy to learn and it’s great for choppy, staccato parts.

Hybrid picking. Also famously known as “chicken picking,” although we never really understood what chickens have to do with it. It’s a dexterous combination of flatpicking and fingerstyle—you play with the pick held between your thumb and index finger in the traditional way, but you also play other notes with the remaining free fingers of your picking hand. It enables some breathtaking guitar work and, done well, you’d swear there was more than one person playing. It’s a staple of bluegrass, country and some types of jazz. Chet Atkins is the acknowledged master; rock guitarists Steve Howe and John 5 are well known for it, too.

Sweep picking. Had the Stratocaster guitar been around in 1800 or so, Niccolo Paganini would’ve been all over the sweep picking. An advanced technique that enables breathless flurries of light-speed notes, it’s used almost exclusively for playing large arpeggios (notes of a chord played one at a time) quickly and fluidly. The notes are sounded with a sweeping motion of the pick in relatively few strokes—the actual physical motion itself is sort of like strumming, only you articulate each note instead of hitting them all together as a chord. It’s tough to master, but once you get the hang of it, it’s dazzlingly impressive. Just ask Yngwie Malmsteen.

Tremolo picking. A technique similar to alternate picking in which a single note is played repeatedly and evenly in rapid-fire succession, adding sustain to a melodic line in which the notes would otherwise decay quickly. Picked fast enough, the note sounds constant. The most famous example is probably the machine-gun Middle Eastern-inflected guitar in Dick Dale’s immortal “Miserlou,” although you also frequently hear tremolo picking in bluegrass mandolin and modern thrash metal. And Turkish folk music.

What type of picking style do you usually play with?