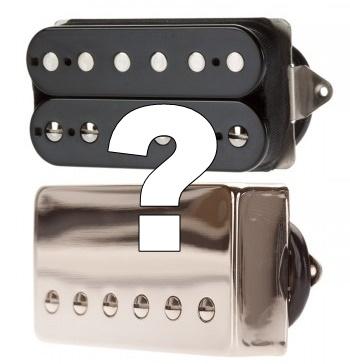 You have probably noticed that humbuckers are often offered with covers and without. While a big part of that definitely has to do with looks and aesthetics, does it also have an effect on their tone? While many claim that it has no impact on tone whatsoever, the truth is it does, although nowhere near as much as other humbucker design factors. In this article, we take a look at the key differences between covered and uncovered humbuckers.

The Major Differences Between Covered And Open-Coil Humbuckers

According to the pickup masters over at Seymour Duncan, there are a few differences between two otherwise identical humbuckers, one being covered and the other not. First, covers can sometimes cause feedback when used with high-powered amps. Humbucker covers can also affect the pickup’s magnetic field, depending on the material used, which will affect tone. For example, brightness might be a bit reduced with chrome, nickel or gold plated covers. Nickel-silver covers also tend to have less capacitance, which can also affect brightness.

I found the Seymour Duncan’s information to be exactly as they mentioned. Using the same guitar, same strings, same amp, same settings – same everything – I made two recordings, one with the covers on (chrome on ours) and another without. Luckily, my set didn’t have the covers soldered to the rest of the pickup so swapping it out was just a matter of taking off the strings and the pickups themselves.

All in all, the uncovered pickup seemed to have a slightly brighter tone, while the covered pickup was a bit smoother and fuller. Nothing too drastic, but it was there. I also found that as I added more gain, the differences in tone became less apparent. While you might get a slightly different result than mine depending on the original cover material, I feel it’s safe to say that – if there is any difference – an open-coil humbucker will be a bit brighter than a covered one, all else being equal.

A Word Of Warning

If you’re thinking about taking the covers off your own set, make sure to keep a few things in mind. While my set’s cover wasn’t soldered onto the pickup, many are. You can break the solder without too much difficulty but be careful not to damage the bobbins as you remove the cover. You will also need to clean off the wax potting that surrounds the coils if you decide to leave your humbucker uncovered.

It should also be said that if you notice any difference, it will only be a slight one, so don’t expect to walk away with what sounds like a brand new humbucker once it’s done. But if you’ve just grown tired of the cover or prefer the look of open coils, go for it, just be careful not to damage anything while you’re at it! Or better yet, take it to an experienced technician.

Which Is Right For You?

If you’re looking for a brand new set of humbuckers but are having trouble decided between a covered and uncovered model, you can definitely take the information above into consideration, but probably only as the last deciding factor in case you really can’t make up your mind. Or, you can just go with what looks better on your guitar. If you are looking for a new set, head on over to our electric guitar humbucker section by using the link below. We have a great selection of both covered and open-coil humbuckers from several manufacturers.

And if you have any questions regarding the purchase of a new set of humbuckers or any other piece of gear, don't hesitate to chat with one of our friendly PAL pros by using the live chat feature below or by calling us toll-free at 1 877-671-2200!

Which do you prefer, covered or open-coil humbuckers?