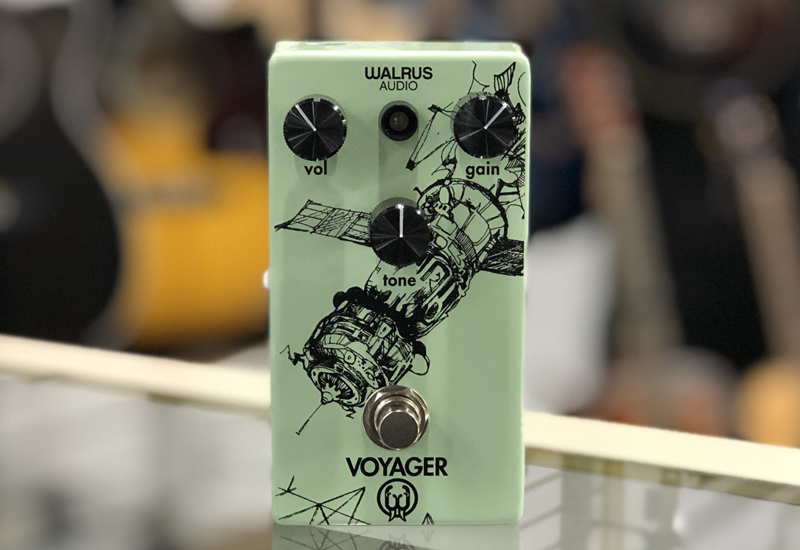 Packing great tone, superb versatility, and top quality hand-built craftsmanship, Walrus Audio pedals don’t just offer ways to color your instrument’s sound, but an assortment of tools that push your tone to the next level. From the Janus Fuzz/Tremolo and its unique yet intuitive dual joystick controls to the insane amount of sonic possibilities packed into the Descent Reverb, Walrus Audio effects never fail to impress or surprise us. Today, we're taking the Voyager for a spin, a preamp-overdrive hybrid that always seems to be mentioned on several players' top lists. Is it as good as advertised? Keep reading to find out.

The Features Of The Voyager Preamp OD

At its core, the Voyager is a low midrange overdrive pedal that can also function as a booster. And unlike the Mayflower Overdrive and it's many configurable settings, this Walrus Audio OD keeps things simple; Tone, Gain, Volume -- that's it. While Volume and Gain are pretty self-explanatory, the Tone knob controls the amount of treble (with a particular emphasis on the midrange).

As far as the build is concerned, this is a top quality pedal through and through. Handcrafted in the USA, the Voyager feels like a solid stompbox that should easily last you years of wear in tear on the road or in the studio. From the feel of the knobs to the satisfying click of the footswitch -- not to mention the awesome paint job -- you can tell that there was a lot of care and attention to detail when this pedal was being built.

It should also be noted that Walrus Audio does not recommend using a daisy-chain type power supply. Instead, it should be used with an isolated power unit, such as its own AC brick (which is what we used), or a simple 9-volt battery.

The Sound Of the Voyager OD

While three control knobs might not sound like a recipe for a versatile pedal, in action, the Voyager proves itself to be very capable of producing a wide range of sounds. With the gain turned low and the tone knob set past its midpoint, the Voyager brightens up the overall tone and adds a great amount of string to string clarity. Lowering the tone knob (with the gain still set at low) gives you a deeper, more subdued sound that still allows each individual note to ring through. Turning the gain slightly below the midpoint begins to yield a satisfying growl. And with the gain turned to its highest setting, the Voyager really kicks things up, transforming your tone into a thick overdrive, providing impressive depth while still retaining the clarity needed to cut through. And that's just scratching the surface.

From smooth and mellow to dirty with plenty of attack, I was easily able to churn out a ton of unique sounds. The only real problem I faced while using this pedal was trying to dial in the exact sound I wanted my first try. Not to say that it was difficult, it just took a little more fine-tuning than I'm used to with OD pedals. Still, a few minutes messing around with the various Tone and Gain knob combinations is more than enough to get a feel for what the Voyager can do. Aside from that, the Voyager is easily one of the more versatile ODs I've come across these last few years.

Oh yeah -- if you're just looking for a clean, colorless pedal that can push your tube amp into natural distortion, the Voyager can do that too.

All in all, the Voyager easily lives up to its reputation as one of the best modern ODs out there.  From its lowest to highest settings, the Voyager provides a superb amount of clarity that suits almost any style of playing. While it might not be as easy to use as other ODs, the few minutes it takes to learn its tendencies are well worth the tones you'll be able to pump out. A true workhouse overdrive pedal, the Voyager easily deserves a spot of pedals boards everywhere!