This week, we here at PAL have been focusing on the ins and outs of the microphone. We began by discussing the main types of studio microphones – which can be read here – as well as each of their inherent pros and cons along with their roles in recording. Not only that, we took a closer look at the basic principles of what makes a microphone work, the differences between pressure mics and gradient pressure mics along with the different variety of microphone polar patterns which are pretty much graphs showing the area of a certain type of microphone’s  sensitivity to sound (which can be read here). Today, we continue our quest in mastering the microphone as we tackle on one of the biggest and most annoying problems in the world of music – that annoying, pestering background noise!

RFI is One Bad Mutha

Feed back and noise – it happens. Whether it’s that annoying hum that has been plaguing pickups since day one or that painful buzz that can creep in during recordings, background noise is definitely a big issue in music. And with that said, microphones are not immune to the problem – more susceptible even since a lot of the times, musicians don’t always know how to correct certain issues and sometimes they aren’t even sure the mic is the cause of the issue. Anyways, one of the main causes of microphone noise – aside from speaker feedback issues – is the dreaded Radio Frequency Interference (RFI). The biggest problem with RFI in microphones is that it comes and goes seemingly without warning and can turn an otherwise perfect take into an unbearable mistake (that might be a bit too overdramatic, but I’m sure I’m not the only one who prizes a flawless track). The noise produced by RFI comes in two unique forms; the first is the sound of a distinct radio station mixed in with the mic’s audio. Pretty easy to catch if you suddenly start hearing the latest weather report behind your voice. The other is a bit harder to hear since it's pretty much a featureless white noise hissing in the background, sometimes at levels that are barely audible.

Where does RFI Come From?

Yep, a real pest, but luckily for us, RFI can be successfully and permanently eliminated in most cases, the only problem is there can be several causes and they are sometimes not that easy to determine. In most cases, RFI in microphones come as a result of insufficient cable shielding methods or materials, inappropriate cable connections or even certain designs of mic circuitry. And sometimes – a bit rarer though – it can even be caused by a strong signal coming from a nearby radio! But in the case of the radio, it only exacerbates the problem triggers mentioned above. As a studio musician, whether you like it or not, you have to be a bit of an electrician because so much of today’s modern music equipment works off of the basic principles in electrical engineering. Whether its pickups, an effects signal chain or even just a tuner- they all work off of our understanding of the way electricity works. But unlike most electrical equipment which work by having electricity in a continuous closed circuit loop, a microphone – along with its cable – works more like an antennae; open on one end and electronically connected to an amplifier on the other, receiving the signals transmitted by our ‘antennae.’ Because it is so much like an antenna, it tends to do what antennas do best – pick up radio signals. This isn’t some big secret and manufacturers know this, which is why they do a lot to ensure that mics and their cable’s are setup to best negate this problem, but it’s not always fool proof, and in the case of cheaper cables, they just don’t hold up as well. Also, there’s nothing manufacturer’s can do to prevent improper setup or unnaturally excessive radio noise. Also, another cause of RFI in microphones can be the mic themselves, specifically certain types of microphone processors. Unfortunately, you’ll have to check for that on an individual basis for each mic model, luckily that information is readily available for most popular makes, it just takes a bit of research or sifting through forums.

Alright, How Can I Kill It?

Alright, so now we know what causes RFI; the microphone cable’s inability to shield it from radio signals, improper connections or certain configurations of microphone processors. When I try to find a fix for any or my RFI problems, I tend to do it in a certain specific order from the more common causes to the least. While you can do it anyway you please, I find that doing it in this methodical order tends to get to the problem quicker and helps avoid wasting time (and money) trying to tackle the problem in any other order. First things first, we have to check the cable connections.

Most mics will come with that very familiar XLR 3 pin connection. Basically, each of the pins have a different task; one holds a positive electrical end (known as the 'hot' pin), another a negative (return terminal), and the last one holds the ground. On the male end of the XLR, the ground is the first pin while on a femal end, it is the metal band that shields the hold where the pin will enter. Take a look at the picture to the right for a better idea. Like any other electrical device, we need a ground to complete a closed circuit so that our signal can make its way to amplifier without any outside interference. When a mic cable’s ground lug or shield is loose or improperly connected, the circuit is not closed, meaning that outside interference will almost certainly be picked up. Another problem is that certain cable connectors (such as Neutriks) do not have a separate ground lug connection point, meaning that the connector’s shells  cannot be grounded, meaning open paths for RFI. It is through these ‘open holes’ in the connection that electrical signal contamination occurs, causing that familiar buzz. If you can start seeing the pattern already, we are pretty much trying to ensure a closed electrical connection. You can be absolutely sure if your cable has a closed circuit by using a multimeter. Simply put each of the meter’s leads to both of the mic cable’s housings (the metal band at the ends of the cable- the heads, if you will). If the meter reads zero or a few single digit ohms, then your cable is closed and you’re good to go. If it reads anything above a single digit, the electrical circuit is not closed and you most definitely will pickup RFI.

Maybe it’s the Cable Itself

The next problem that should be looked at is the cable itself. Even if you have a proper connection, the different materials used to protect the wiring inside the cable from picking up outside noise differ in their ability to shield. Also, all manufacturers do not use the same materials in their cables, meaning some will be more susceptible than others depending on the strength of the radio waves. From my experience in checking out several different independent cable tests for RFI susceptibility, I can tell you that the general consensus says that cables made with double Reussen layer shields faired the best by far than any other method of shielding.  Neuman and Gotham both make cables out of this material, and probably a few more. Depending on how strong the interference is, simply having a solid connection won’t be enough if the RFI can make it past your cable’s shielding. 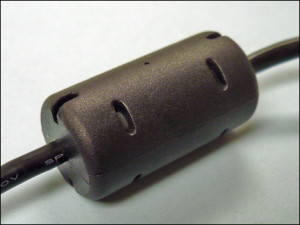 A ferrite bead housing a cable.[/caption]

Another method that works fairly well is the use of microphone choke coils. When talking about mics, a choke is a wire that is coiled in such as way that it suppresses certain frequencies of audio as it passes through the cable (much like humbuckers in case you didn’t know) that is usually placed near the balanced output connection of the mic. They kind of look like small resistors or tiny round spools of wire. Anyways, chances are that your mic probably already has one of these in place but if not, it would be a smart buy as I find that when both cable shielding and connections are can’t do the trick, a good quality choke coil should. But be careful when going out and purchasing a choke. Make sure it’s not too strong. Try to get something below 25 micro-Henry (its unit of measurement) as anything above this can start interfering with more than just background noise (namely, that all important mid-range). Another method that is not as common, which I suggest you only do as a last resort, is the use of ferrite beads. These guys are passive electric components used to suppress high frequency noise and pretty much the electrical version of a choke. I’m sure most people have seen these before as part of a cable or plug. Take a look at the picture to the side and awe at its familiarity. Anyways, sometimes wire coils are spun around the actual bead inside of its plastic casing. The spun wire helps the bead absorb high end frequencies associated with that annoying electrical hum. You can buy these and place them at certain spots on a cable to help kill off RFI, but you’d have to check with the manual on that one on where exactly you need to put it.

And finally, probably the best way to cure that pesky RFI is by not adding to it yourself! Normal household objects like fluorescent light bulbs, dimmers, turned on radios, electric motors, etc. all cause a degree of interference. Keeping most of these things away will be your best chance at avoiding that annoying noise, but if it ever happens to make its way in your mix again just follow these tips and show it no mercy! And if none of that can fix your problem … you might just need a new mic.