With the seemingly endless choices of studio microphones out there, those unfamiliar with the nitty-gritty details can easily become overwhelmed to the point where they might simply judge the value of a mic by price alone. And while it’s generally a safe bet to assume that a thousand dollar mic is probably better than something closer to two hundred, that's not always the case. For example, certain mics work better for specific applications -- be it vocals, drums, or instruments -- regardless of price. With that said, we decided to take a look at the best bang for your buck studio mics with multiple uses. 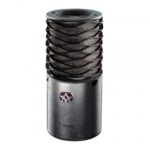 The Aston Origin is a high-performance cardioid condenser microphone known for its superb versatility. Whether you're looking to mic an amplifier, record an acoustic session or even utilize it as your main vocal microphone, the Aston Origin will deliver. Core features include a hand-selected, one-inch gold-evaporated capsule that is paired with a high-end transformer-less circuitry to deliver the best performance possible for the price. Sound-wise, the Aston Origin features a smooth yet natural sound with minimal coloration, making it the perfect choice for recordings that require a noticeably intimate feel. 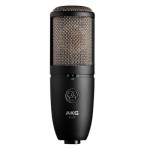 The AKG P420 is a large multi-polar pattern diaphragm condenser microphone built with the cost-conscious musician in mind. But don’t let its slim price tag fool you, as the P420 offers plenty of useful features and overall great quality to earn it a respectable reputation with several of its owners. Among its most admirable features is its three selectable polar patterns: cardioid, omnidirectional and figure 8. If you’re familiar with the intricacies of each of these patterns and what can be done with them, the thought of all three in one mic is most likely a very enticing feature that screams versatility. But all the polar patterns in the world wouldn’t amount to much if they didn’t perform well. Luckily, the P420 doesn’t disappoint. For a great studio work-horse condenser mic, look no further than the AKG P420. 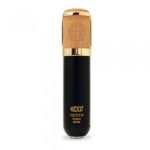 The V69 ME is a large diaphragm tube condenser microphone that boasts a classic sound that nicely enhances both vocal and instrument performances that lends itself just as well in a professional or home studio setting. Featuring a small boost in the top-end which gives off a bit of brightness while still maintaining the warm tones of a high-quality valve mic, this mic requires very little EQ maintenance and will easily make your vocals sound nicely in the mix. And thanks to its extremely low noise level, warm tone, and wide dynamic range, the V69 ME works equally well on both analog and digital recording devices 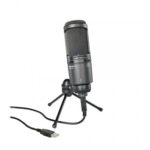 Similar to the standard AT2020 as far as specs are concerned but able to connect directly to a computer, the AT2020 USB is a great choice for home musicians as well as podcasters. This mic is known for its tonal consistency across a wide dynamic range along with a subtle sweet spot that enhances the upper mid-range and lower treble frequencies. Its cardioid polar pattern and low mass diaphragm also help reduce the unwanted pickup of sound from the sides and rear to improve clarity as you record. The AT2020 USB also works perfectly with high-end digital recording equipment, thanks to its low self-noise. If you’re looking for a no-nonsense, plug and play mic that boasts quality sound, the AT2020 USB should easily fit the bill.

The Electro-Voice RE-20 is known as a favorite among broadcasters and sound engineers worldwide for several reasons. First and foremost, it's a high-quality workhorse that offers superior sound capture. Furthermore, core features such as a heavy-duty internal P-pop filter and an internal element shock mount makes getting a low-noise, vibration-free recording a cinch. As a dynamic mic, it can easily be used for live situations but don't discount its use as a versatile studio mic as it works well on everything from vocals to drum kits and even guitar. For a versatile, high-quality dynamic mic, what better choice than a true industry standard? 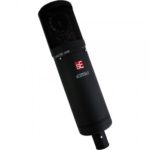 Known for its reasonably bright sound and solid thickness in its output, the 2200a II has a balanced sound that works well for vocals. While its predecessor, the 2200a MKII, boasted multiple polar patterns, this more affordable, fixed-cardioid version retains the classic sound of the original along with a new black finish and an overall smoother character. Just take a listen to Amy Winehouse’s “Back to Black” to hear this mic in action and you’ll know why the 2200a II was her mic of choice. Overall, this mic is a great choice for both home studio and professional applications.

Have a question about the pieces above or any other gear we carry? Don’t hesitate to chat with one of our friendly ProAudioLand pros by using the live chat feature below or calling us toll-free at 1 877-671-2200.