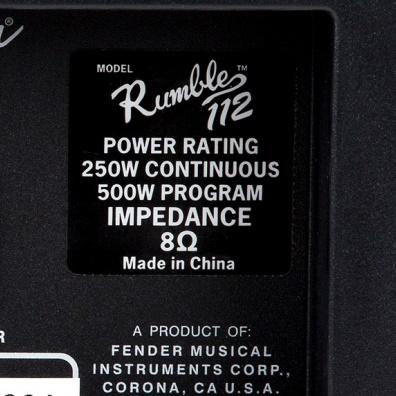 If you own a bass amplifier, you’ve probably glanced at the back panel and noticed that the shown technical information includes a power rating specification that lists two different wattages: continuous and program. For example, the Fender Bassman 115 Neo bass cabinet features power ratings of “700 Watts Program” and “350 Watts Continuous.” If this has you wondering, “What does it all mean,” you’re probably not alone.

While there’s a lot of deep, technical information that we can delve into regarding power ratings, we’ll be focusing instead on the general aspects of the concept as it relates to these two ratings, information that is relevant to everyday bassists that want to use their gear correctly.

In short, these two wattage ratings refer to the speakers and the amount of power they were made to handle coming from the amp. The very meaning of watts relates to the average continuous power, and bass signals consist of peaks and valleys that – for short durations – can be higher than the average level.

About The Continuous Rating

Of the two ratings, "continuous" is the lower wattage and the one more relevant to the everyday use of speakers. It details the amount of average power that a speaker can more or less handle continuously without risking any damage, such as melting the voice coil or degrading the glues that hold the numerous parts together.

In other words, you can think of the "continuous" rating as the amount of power the speakers can safely handle with standard use. It's half the amount of the "program" rating, so you can think of it as being the 60 mph point on the speedometer of a car that's able to top out at 120 mph. Your average speed during a typical day is most likely a lot closer to 60 mph than it is to 120 mph, the max speed of your car. Similarly, your cab's "continuous" rating is a lot closer to the amount of power actually being used than the rarely hit upper limit of its capability (the "program" rating).

About The Program Rating 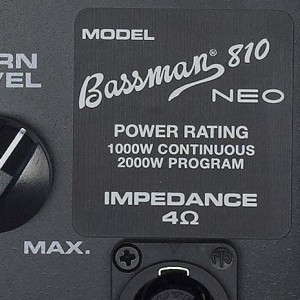 The "Program" rating is always twice the wattage of the "Continuous" rating.[/caption]

The "program" rating (the higher wattage of the two) refers to the maximum amount of peak power the speaker can safely handle in very short bursts. Continuing with the car analogy, it's like the top speed of your car — while your vehicle can reach a max speed of about 120 mph, you never actually drive that fast, and if you do, it's probably for a very short while.

Your bass rig is the same — you're more than likely rarely (if ever) pushing it to its peak power limit. In that sense, the "program" rating is like 120 mph on the speedometer; while you only realistically drive at 75 mph or less during a typical day, if you need to reach 90 for a short while, you can do so without damaging your car.

Again, it should be noted that this is only a brief and very general explanation of very broad concepts meant to give you a rough idea of what's going on. There's certainly a lot more to it. But with that said, this simplified example should hopefully give a good idea of what these two ratings mean!

Did the car analogy give you a good idea of what these two ratings mean? Why or why not?