Few names are as synonymous with quality as Universal Audio. Founded over 70 years ago by Bill Putnam Sr., Universal Audio is well known in the music gear world as the creators of some of the most iconic studio engineering equipment around, used by legends including Frank Sinatra, Nat King Cole, Ray Charles, Duke Ellington, Ella Fitzgerald and more. More recently, they have also become a huge player in the digital audio space, responsible for some of the music world's best software and recording tools available. Today, we want to take the time and take a look at just a small sample of what Universal Audio has to offer. 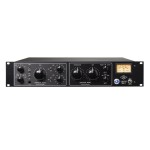 The LA-610 MKII was made to improve upon the original LA-610, a product that many consider one of the best around (which was based on the original 610, used by legends including Frank Sinatra and Eddie Van Halen). So, how exactly did Universal Audio manage to improve upon a piece of gear that was already a hit? By adding plenty of additional useful features and keeping the tonal qualities intact. While the preamp and compressor are identical to the previous version, the MKII adds true compressor bypass, an improved output signal, larger metering, and an auto-sensing power supply. Better yet, it comes in the very popular black-on-black design previously featured on the Signature Edition of the LA-610. If you're a fan of the original or the previous model, the MKII's additions will definitely make you want to trade up to this modern piece of gear. 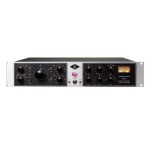 Another piece of gear based on the legendary 610, the 6176 combines the legendary tube preamp with 1176LN solid-state compressor, creating what is easily one of the best channel strips around. Not only that, the 6176 also comes packing plenty of modern features and useful extras including mic, line and hi-Z inputs, selectable mic impedance, adjustable attack time,  a 15 dB pad, and 2-band EQ. Featuring top quality components and circuitry, the 6176 channel strip was made for players that want the classic sound and performance of a legend with the power and flexibility of a modern piece of gear. 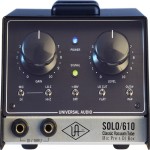 The Universal Audio SOLO 610 was built and designed to provide the same legendary sound of the 610 console in a single-channel, portable-friendly form factor. The SOLO 610 features an all tube preamp circuitry, delivering that warm, silky smooth tone that professionals have come to depend on, all of which is hand-built in the US. It also comes packing plenty of useful features including mic and DI inputs, continuous gan and level controls, a gain-structuring Shape switch, 48V phantom power, a low-cut filter, phase reverse, ground lift, and a versatile mic/line level output switch. For the legendary sound of the 610 in the studio, at home or on stage, look no further than the SOLO 610. 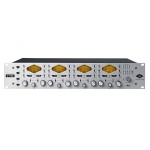 At its core, the 4-710d 4-710d is a four-channel mic/line preamplifier featuring a unique tube and solid-state hybrid system that is perfect for both mics and instruments. Key features include a selectable 1176-style compression circuitry on each channel, along with four additional line inputs that feed eight channels of high-quality analog-to-digital conversion. Better yet, the 4-710d features a build and quality level that is normally seen with top-tier boutique manufacturers that sell gear at twice the price, all of which is combined with the sound expertise and engineering know-how that Universal Audio is known for. If you're looking for a highly flexible preamp that delivers pristine sound and performance, the 4-710d will definitely fit the bill.