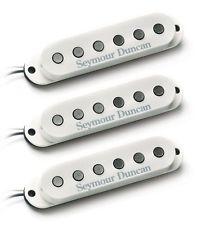 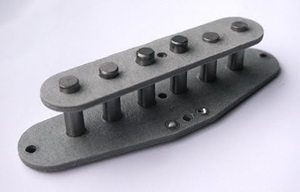 The difference between a flat pole and staggered pole guitar pickups goes far beyond cosmetic and can drastically affect tone – which means your playing style. Read on and find out exactly how pole positioning changes a pickups sound and which one is right for you.

On most electric guitars, the pickups are usually located at the center of the body beneath the free part of the strings between the bridge and fret board, although they can be attached to the bridge, neck or even the pickguard, such as on several acoustic electric basses and guitars.  All pickups work essentially the same way, with certain traits specific to the kind of instrument it will be used for or the traits of a certain sound that is trying to be achieved. They work by picking up the vibrations of a plucked string via a magnetic field created by magnets and the coils around the poles, translating the input into an electrical signal that is sent to recording equipment or amps.

Most electric guitars use magnetic pickups which can either be active or passive. Pickups are inherently passive by design and are the standard in most guitars while active pickups are essentially “boosted” versions, using electrical circuitry to modify the signal, but require an extra power source to function, such as a battery. Other pickups such as piezoelectric pickups are also common, but are generally used in acoustic electric guitars (usually in combination with traditional magnetic pickups) and classical instruments such as an electric cello or violin, which gives the instrument the advantage of avoiding picking up any excess magnetic noise that can distort the output of the sound, especially important if you want to retain the clean natural sound of an acoustic instrument, only amplified.

Guitar manufacturers such as Fender usually ship their guitars with staggered-pole pickups, citing their tone balance and ease of use as a recommendation for most guitarists. The problem often cited with these types of pickups is differences in volume for each individual string, creating smeared and muddy tones caused by the inconsistency in volume, although some do enjoy the effect. Although this may sound like an unreliable setup, staggered-pole pickups rarely overpower the amp since certain strings such as the high E or the lower two strings are underutilized, resulting in a consistent and balanced overall sound (although the G string does tend to be heard above the rest) and work better out of the box for newer guitarists still not ready to delve into the extremely deep world of a fully customized guitar.

Flat-pole pickups on the other hand do retain string volume balance. No hidden high E string sound or muddled low notes, which might create problems for inexperienced players not aware of their inherent nature or knowing how to compensate through other means such as amps and effects. The first thing most people notice when changing from staggered-pole pickups to flat-pole pickups is an increase in bass tone since there is no longer a need to compensate for weak lower strings. This gives the entire sound a much deeper presence, which is why bass guitars are usually shipped with flat-pole pickups.

Depending on what type of music you’d like to rock out to, either choice might be right for you. Purists and classic rock tribute band members tend to stick with staggered-pole pickups. It’s what worked for their heroes, although the rock gods of yesteryear didn’t have the same options that we modern day music mortals have the advantage of. Even so, staggered-pole pickups have a rich balanced tone familiar to most and require much less know-how as far as the ins and outs of guitar tones. If metal mania is more your style, then take advantage of the superior resonance of a flat-pole. Deeper, fuller low notes will not only give that dropped D tuning of yours a much welcomed kick in the rear, but the more vibrant and piercing high E string will definitely help those solos melt some faces!